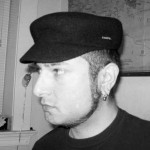 James Sumner Leese- my need to understand the world around me on as basic a level as possible is what leads me to the world of math and science. Where I create and recreate systems and objects as huge mathematical structures. Made from algebra, trig, tiling systems, strange attractors, and fractals. I then clothe them with programs which give them color, volume and tone. At this point they have become objects to me, objects of great beauty and complexity which I then explore and study for composition as you would any photographic subject. In an attempt to find the beauty which exists independently of the equations and remove it from its mathematical genesis while at the same time revealing it.

I studied at the Academy of Art University after which I began to produce my own work merging my love of math and science with my education in design. I create in many mediums and have participated in many group shows and recently I enjoyed my first solo show on at Amsterdam Caf?? August 3 and have since licensed eight images to POD publishers and am continuing to explore the opportunities which exist for me and my artwork.

Originally from the Front Range I am currently on the west coast reclaiming some roots while weaving some baskets, making things balance and proving that art can be made with the whole brain.